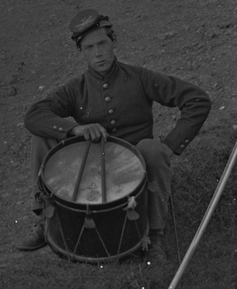 Only one man on the roster of Co. F in Massachusetts Soldiers, Sailors, and Marines in the Civil War, Vol. 5 (Norwood: Adjutant General, 1932), pp. 806-813 (click on "Soldiers of the Regiment," above) was listed as "Musician" and none were listed as "Drummer." The Musician was George H. Batchelder, a 16-year-old clerk from Salem, MA when he enlisted and thus 18 or 19 when this picture was taken 2 years and 3 months later in Maryland - assuming this is him. I found no picture of an older George because he unfortunately died young at age 24, of consumption, an absolute scourge until the latter half of the 1900s. His death record is online at the New England Historic Genealogical Society (NEHGS) web site.
Gifford, L.

I am pretty sure the image below is Pvt. L. Gifford of New Bedford, Co. F, a relative of mine, lying down on the job. Pvt. Gifford served Sep. 1863 - Sep. 1865, in both Boston and Washington, where his unit's picture was taken by a Matthew Brady associate at Ft. Stevens in August 1965, after the war. He enlisted at age 19 and later married a 3rd cousin of Lt. Everett C. Bumpus, below. He worked primarily in MA and RI as a foreman in spinning mills and his NARA pension documents describe him in middle age as about 5'7" and 135 pounds, with black hair and blue eyes. At enlistment he was said to be 5' 6 1/2" and his father, who also enlisted, as 5' 5 1/2", with the same coloring. Pvt. Gifford was identified by a Bristol Co., MA author as one of the soldiers on the cover (and inside) a book about local men in the Civil War, though the sepia studio image, with light glinting off his pomaded hair, made him look blonde. He was very skinny in the book photo, like the soldier below, and unfortunately he posed in uniform but not wearing his cap with the big letter "F." I used the book image to search for matches in the LOC's group photos. Thus, if the author's identification was wrong, mine is, too. The photo in the book was credited to people I've never heard of and the author did not reply to my letter asking for more information. The only image I have of L. in old age is of such terrible quality that you can barely make him out (polar bear in a snowstorm.) Normally I do not publish online images that are not in the public domain without written permission, but I'm making an exception here in hope the book author (left) and photo owner (right) will contact me. If anyone has a better image, please let me know. Photo credit for regimental image: Library of Congress, Prints and Photographs Division, LC-B817-7917.
﻿TEACHMAN, SIDNEY/SYDNEY MANCHESTER

I do not yet have a photo of Pvt. Teachman (1845-1932) from a public domain source but you can see a noticeably retouched photo of him as an older man on findagrave.com. (See blog entry for August 30, 2016 on my other site, mayflowerfaces.com, for a source on photo retouching of the period.) Findagrave does not have any children listed for him so I assume there were none and consequently have put his name here in black. It did offer a middle name and spelled his first name differently, so if you have proof of the definitive spelling please let me know. There were also photos with the entry of his younger brother, Abram Lawton Teachman (1847-1929) and his paternal grandfather, Abraham Teachman (1773-1871), but nothing that would help one pick out the right soldier in an 1865 group photo. Below is my current first choice for Sydney/Sidney in the group photo of Co. F, 3rd MA Heavy Artillery in August 1845 at Ft. Stevens. He is standing at the center rear of the photo, up against an earthworks and with a stack of cannonballs and an unidentified wooden object at his feet. If I have the wrong man and you can document that, please enlighten me. Pvt. Teachman also spent several months in the 3rd MA Inf., as did soldiers Anthony, A. Barrows, Connolly, L.G. Davis, Gammons, W.C. Gifford, Groves, Kenner, Lamson, Rodmany, Petty, Webb, Winford, Wood, and Wady. Photo credit: Library of Congress, Prints and Photographs Division, LC-B817-7917. Remember NOT to republish this so-called identification anywhere because this is simply a best guess.