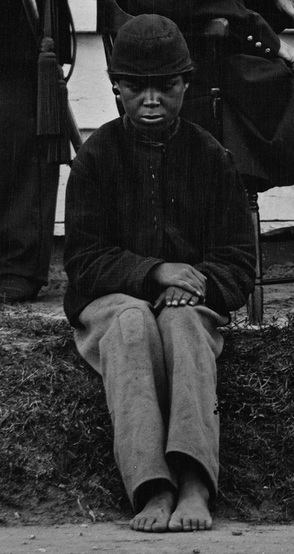 The curious thing about this photo is not so much that there is a child in it but that he (a boy, going by the clothing) is in only one of two images likely taken just a minute apart.  He is perched cautiously on the grassy edge of a berm that served as a patio of sorts outside a small white building, probably a barracks, at Ft. Stevens. The Library of Congress caption reads: "Washington, District of Columbia. Officers of 3d Regiment Massachusetts Heavy Artillery at Ft. Stevens" and the call number is LC-B817-7697. The collection includes a nearly identical shot of the same soldiers in nearly the same poses, but minus the child. The soldiers have shifted enough to know that you are looking at two different images, not the same but with the boy erased in one image. The second image states that these were officers from Co. K and Co. F and several can be seen in other group images labeled as Co. F soldiers. The officers are also not named and neither is the soldier to the far right, standing next to what must be a makeshift shady arbor on the side of the building.
According to the "Aunt Betty's Story" marker on the Brightwood Heritage Trail, the land on which the fort was constructed was the home of Elizabeth Proctor Thomas, said to have been a free Black woman, b. 1821, and married to a man named James. No one in the 1860 or 1870 census matches the description so I am unable to even guess whether the child in the photo is hers, a neighborhood resident, or what. A close look reveals that he is wearing a pinstriped man's jacket with the sleeves presumably shortened, the trousers are patched, his feet are bare, and the hat looks homemade. To the modern-day viewer, his pose does not suggest a happy, carefree childhood, though his facial expression seem more dutiful than fearful. The officers are paying him no heed. Any information on this individual would be welcome and used to update this site.